Well, you may have noticed that I’ve not been posting a whole lot lately. This is because I’ve been in a car accident, and a humdinger at that. Long story short, the other driver was definitely at fault in the front driver side to front driver side collision. Insurance stuff is finally starting to move through and accounts are being settled. Everyone walked away figuratively from the accident.

Myself and my girlfriend are still hurting, but we’re alive. She has a lot of bruising, I have a lot of whiplash and shoulder pain, plus a mostly healed chemical burn/abrasion from the airbag that will leave a tidy little scar.

As for my vehicle, you might remember Wembley, my prior Honda Fit, from this photo. 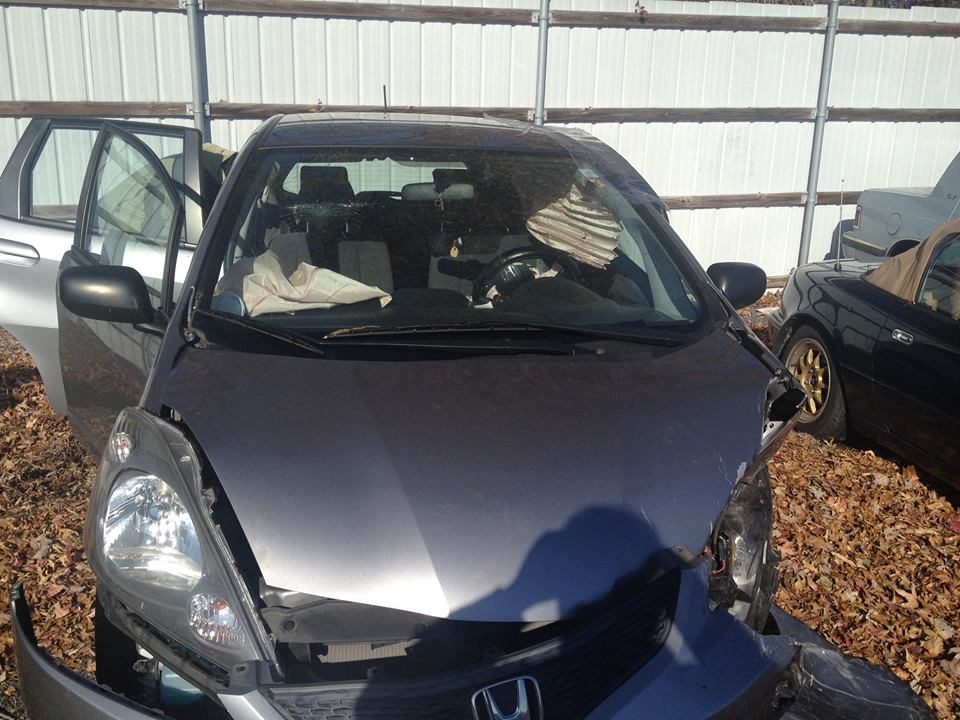 As you can see, Wembley is totaled. Once the airbags come out, that pretty much puts the toe tag on a car. Even if they hadn’t gone off, there’s a lot of damage there (both seen and unseen in the pic) – too much for the car’s value.  So now, I have to bury Wembley and find his spiritual successor.

I also have to put myself back together.

Anyone who’s been in a collision like this can I suppose tell you a similar story to mine. The initial shock, the adrenaline pouring into your body, the confusion, and chaos. It’s bad. I was worried more about my girlfriend, and curiously enough, the guy who plowed into us, being alive and ambulatory, in that order. I got an ambulance ride and they took me to trauma where they cut me out of my clothes, jammed in an IV, and carted me off for various scans. Three hours later, I was released with a buttload of pain killers in my system and a prescription for more. The pain has been pretty bad – but the Percoset (and all painkillers, really) has some very negative side effects, so it’s been mostly Ibuprofen and bed rest when I can catch it. Sleeping is proving to be a bit of a difficulty. No matter how I try to sleep, it’s hard to get my shoulder into a position that doesn’t lock it up and cause a lot of pain which then turns into insomnia.

It’s been about two weeks now since we were struck. There’s still a lot of lingering pain, but, it feels like a lifetime ago otherwise. The event has already earned it’s place in the pantheon of life changing events in my life. It is now filed under ‘The Accident’ in my mind with concomitant capital letters. When I think of the word accident, this will be the first thing that hits my brain from now until either the day I expire or another accident of greater magnitude takes over this one (which I pray does not happen). The accident has adjusted my perceptions enough to change course of things to some degree.

The biggest change is that of the financial path my life was to take. I was almost there. I was almost paid off on this vehicle. In another five months, I was going to be car payment free for however long I could keep Wembley running. I am now back on the horse for car payments. Probably as soon as this week.

This also means car shopping. The good news on this front is that the car at least held some kind of value. The insurance folks have reimbursed me and paid off the old lien on the car. Now all I have to do is just wait for things to finish up. I have an appointment to work with the guys at the dealership tonight, and with any luck, Wembley is replaced with a younger brother. I was so pleased with the Fit, that it is my go to for replacing Wembley. It’s name is yet to be determined. I hate to be the guy who goes with Wembley 2.0, Wembley II, or Junior – but I’ll think of something.

In the meantime, I’m counting my blessings. Thank you to those who’ve checked in and made sure my girlfriend and I were okay, thanks to those who helped with the immediate aftermath, and thanks to everyone who offered support through prayer, well wishes, blood sacrifice or the famed and justly popular ‘other’ (always the biggest category).

Here’s to seeing everyone out on the road again soon.