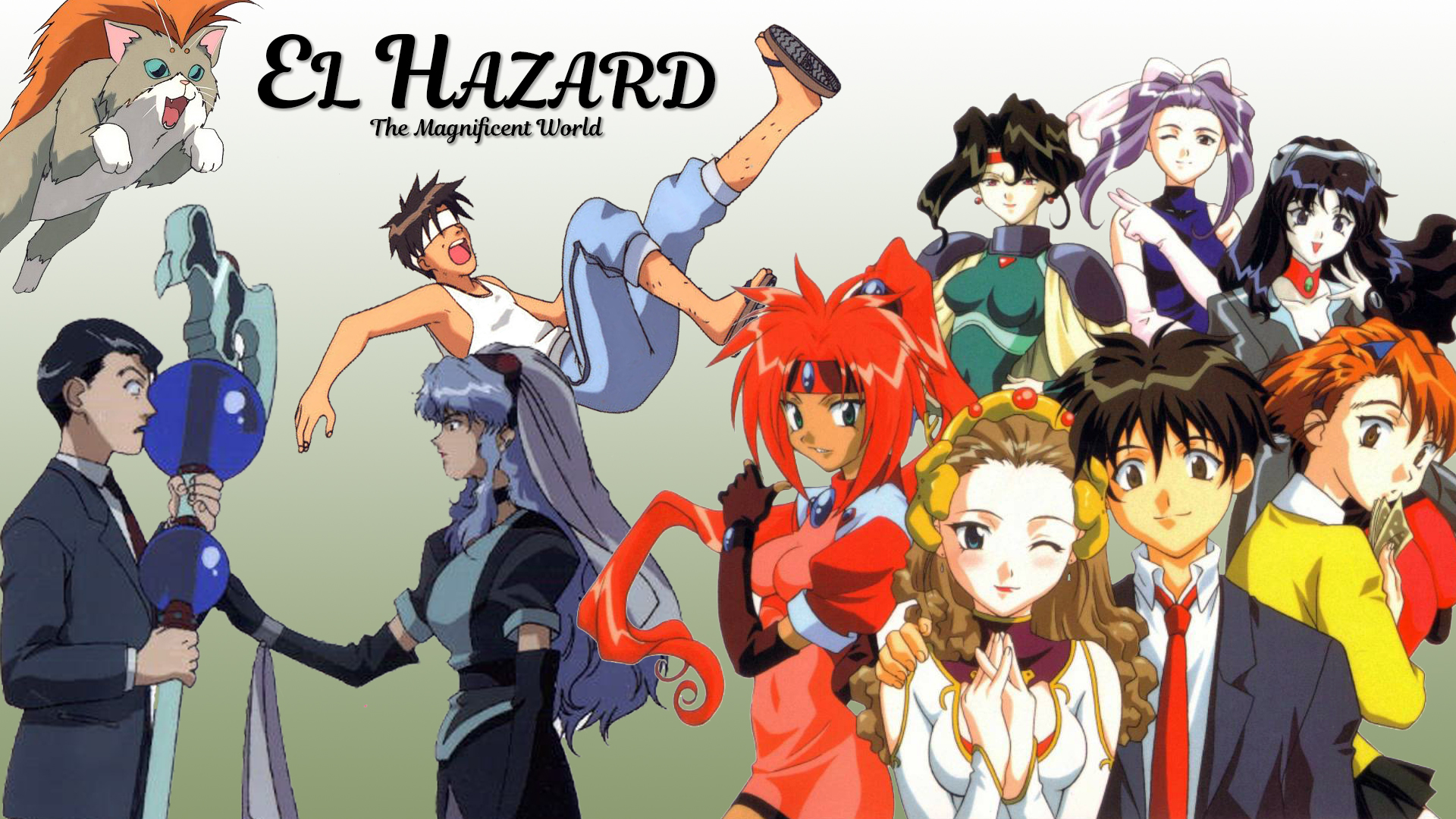 I promised you a blog post today based on my last post. So, let’s get down to it.

One of the things I’ve wanted to do for a while (over a year, really) is to take some time to go over the storytellers and/or stories that have helped to shape me into what I am. I don’t want to hit anything too heavy (I could probably write a book about Neuromancer at this point) so I thought I’d go with one of the lighter pieces for today. It also helps that I watched this title again with my girlfriend two days ago.

The story in question is from an anime hailing from the mid-nineties: El-Hazard.

What Is It About?

The story is a common one in Manga and Anime: a group of people from our world are transported to another world. In this case, the new world is called El-Hazard. The world has a strange mixture of high-technology and mysticism that provides what falsely appears to be a magical society. Priestesses manage El-Hazard’s  advanced technologies, most of which have been lost to time. Everything has an Arabic flavor from the clothes to the environments.

The four new immigrants to El-Hazard have varying degrees of difficulty adjusting to their new world. The main character, Makoto, quickly learns that he is a dead ringer for one of the local princesses (which he finds super awkward). Nanami finds herself in the middle of a desert, having to waitress to make a living. Katsuhiko realizes he’s surrounded by bug people. And their teacher, Mr. Fujisawa… well, he adjusts pretty well at first since it seems he’s been granted great physical skills and unrivaled fighting techniques – so long as he’s sober. Which is kind of a problem for him, what with him being an alcoholic.

Like Mr. Fujisawa… they all gain strange abilities, some immediately apparent, others not. Katsuhiko can speak with the local insect monsters, the Bugrom. Nanami can see through illusions. And Makoto… nah. I won’t spoil that for you. Despite the fact that the Anime is twenty-two years old.

Makoto, Nanami, and Mr. Fujisawa find themselves embroiled in local power struggles after Makoto is coerced by the nation of Roshtaria into posing as their secretly missing princess. Katsuhiko uses his newfound and innate ability to speak with the Bugrom to rally an giant insect army.  He pushes the Bugrom and their queen, Diva, to launch an attack on Roshtaria. The reason he does this is because his ‘life long rival’ Makoto is amongst their people – well, that and because he has a massive inferiority complex. To add to the conflict, there’s also the matter of the Phantom Tribe. They’ve worked for centuries to bring the whole of El-Hazard under their rule. Soon enough, devastating ancient technologies are being deployed in a growing war and the mystical powers and long lost relics start making for fantastic fight scenes.

The whole of El-Hazard hangs in the balance, with the four newcomers providing the pivotal thrusts that will decide the fate of millions.

The story itself isn’t a new one. Like I said earlier, Anime uses the misplaced stranger(s) in a strange land trope frequently, as do most other mediums and genres. El-Hazard simply plays it to the hilt. More importantly, it’s a story with multiple levels. It starts out silly and light hearted, with alcoholic hijinks, gender-bending mistaken identity, megalomaniac delusions of grandeur, and, yeah… a lot of cheesecake and sexual comedy. It also manages a fair amount of drama as well, featuring everything from young infatuation triangles to the impact of what genocide does psychologically to a living weapon that is made to wage it.

The characters all stand out as well. One of my favorite characters is one of the Priestesses of Mount Muldoon, Shayla-Shayla. She’s easily in the top ten heroes list for me when it comes to Anime. She typifies the kind of flawed hero you find in the genre: brash, hot-headed, young, a little too eager to fight because she’s badass. She has issues making connections with people (apart from using her fists) but, she’s always on the right side of the battle. She always fights with style. She’s a character that I’ve used to create RPG characters from. She made for a great Fire-aspected Genasi Ranger In Forgotten Realms.

Another personal favorite character is Mr. Fujisawa. Personally, I think he could have a series all of his own, letting us all watch the life of a genial alcoholic who gets super powers when he’s sober (and even more powers if he stops smoking). He’s a great bit of flavor for the whole story. Whenever things get too heavy, he’s there to relieve some of the pressure with either a well placed FUJISAWA KICK (you must capitalize this signature move) or an inopportune bender.

The rest of the cast aren’t small potatoes either. Nananmi, Allielle, Dr. Schtalhubal, and the other two Priestesses have their own charisma to bring. Even the bad guy, Katsuhiko, is the kind of villain you love to hate – mostly because he’s so catastrophically inept despite commanding Queen Diva, the Demon Ifurita, and the Bugrom.

And then, there’s this guy:

I don’t think he (?) even has a name and he shows up for less than ten seconds. My fellow Otaku (the pejorative Japanese word for fanboy/girl –  more benignly used in the US) in the area have always just called him ‘The Ba Bum Bum’ (a name rooted in onomatopoeia – it’s the only noise he makes).  He waddles through a single scene. His only purpose is to make Mr. Fujisawa think he has the DT’s. God bless him. I love this… thing.

Given all of the above, I get nostalgia and an inner glow when I think about El-Hazard and the time I was first introduced to it. It’s still out there on DVD, though I’m not sure there’s a Blu Ray release of it just yet – at least not one you can find stateside. But when I find one, oh yeah. Come to papa.

Ultimately, all of the above led me to try to make stories that could have layers, be fantastical as I could make them, and present (sometimes hilariously) flawed characters that readers hopefully come to love.

El-Hazard wasn’t my first Anime. but it’s definitely the first I took seriously enough to collect all of it. My intake of Anime was limited since it was not as big in the States in 1994 as it is now.

My personal collection back then consisted of two feature films (Akira and Macross: Do You Remember Love?), a handful of incomplete Robotech VHS tapes that were Macek’ed to hell and back, two VHS of Macross II (ugh, my taste was poor), and several Starblazers tapes of truly horrible quality. I’d also seen a few rentals like Fist of the North Star (ugh), Appleseed (an adaptation of a great Manga to middling Anime), Black Magic 88 (another meh entry), and yeah, I’d been scarred by Urotsukidoji (why people watch that kind of shit is beyond me).

Then I met Marc.

Marc was a little older than I was and had built up a wealth of Anime viewing in those extra years. His access to early Anime hubs like Anime Crash (sadly, no longer a thing) and ties to the Otakon and New York university scenes (where fansub culture thrived) made him practically a connoisseur by comparison to me at the time. Delaware was not exactly loaded with Anime at that point.

To put it in the terms of another Anime, Haibane Renmei, he helped me through my new feather phase.

He suggested a lot of great stuff in the fall of ’96 and the year of ’97. El-Hazard was one of the two big series he got me hooked on; the other was Giant Robo, released by Manga Entertainment (arguably the biggest of the production companies back then). When he lent me his Dubbed VHS of El-Hazard… that was that. My Anime collection was on the rise. I’d save money to hit Tower Records or Suncoast Video – two of the only places in Philadelphia where I could reliably find Anime at a price I could afford. When they were in at Between Books back in Delaware, I’d get them there (tax free!). It cost a lot for me to get my own El-Hazard collection (and many other titles) – but it was worth every penny. It was probably the first Anime I bought with my own money and with any kind of regularity. I get warm fuzzies just thinking about it.

This also marked the beginning of what I like to call the ‘Pioneer Era’ (roughly between 1995 and 2000). During the eighties and nineties, Otaku were working off VHS tapes, and that had consequences. When you bought a title, you had to make a choice: original audio with subtitle tracks, or english dub and no subtitles. Debate raged hotly between Otaku over which was better – and still does, though it’s an argument that doesn’t involve opening your wallet any longer (thank god for multiple language tracks/subtitles). While I was okay with dubs, many were not – and usually for good reason. U.S. Manga Corp (one of the big producers at the time) was not one to spend a lot on dubbing Anime titles, nor were a lot of other production houses. There were some truly awful dubs out there (the original Captain Harlock comes to mind) if you didn’t want to read your Anime. If you showed up to an anime night with a group of Otaku, the groans would start when one format or the other was revealed. Subbers said the audio translations were poorly made and executed. Dubbers hated having to read an already busy medium. Ideological purity threatened friendships. I know at least one Otaku who will still leave the room at the sound of an English dubbed Anime.

El-Hazard was one of the first VHS dubs that I remember with an audio track that didn’t feel phoned in or waaay off the mark. Pioneer went on from titles like El-Hazard to create excellent dubs (Tenchi Universe, Serial Experiment Lain) that only got better once they turned into the Geneon studio (where they produced great dubs for Trigun, Last Exile, Hellsing). They’re still around, but after the American Anime Bubble finally burst in the late 00’s, they retreated back to Japan where they work on that side of the Pacific only. According to Wikipedia, they’re now owned by NBC/Universal.

Due to Pioneer’s early efforts and the emergence of multi-language DVD options, later production companies would get better voice talent, better translations, and generally and put more effort into their production process.