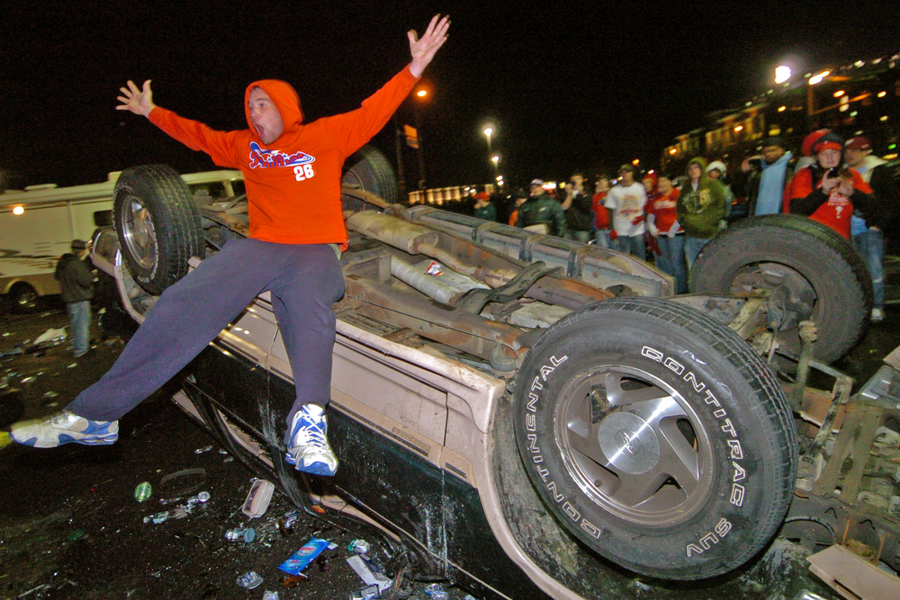 I have one sport that I really, truly love. Baseball. I remember the family sitting around the TV watching Pete Rose and Mike Schmidt in my grandmother’s mobile home (never a trailer – she’d correct you if you called it a trailer). I remember the long dry spell of the Daulton and Dykstra years. I remember the Philadelphia equivalent of the Bad News Bears take it to the Series versus the Blue Jays, then letting Mitch ‘Wild Thing’ Williams blow it for them. We’d go every Sunday for a day game and eat KFC in those last couple years when grandma started to lose it. It had less to do with sports or admiration of the players’ prowess and skill growing up. It was a thing that made my dad and my grandmother happy. It brought us together in hating the Pittsburgh Pirates and the New York Mets over a Sunday lunch.

Between grandma’s death in the late nineties (the decade, not her age) and the constant drubbings my appointed team received on a regular basis, I tuned out for a bit. I had lots of other things to occupy my time by then and my baseball interest wouldn’t really return until the rise of the team in 2007 and their 2008 World Series Victory.

And now, honestly, Baseball feels like it’s dying. People hear me say ‘I love baseball’ and I see their eyes glaze over in pity. ‘Oh… you chose poorly’ the look says.

There’s not as many fans of the sport I actually have some genuine interest in anymore. Being a Phillies fan also draws a fair amount of ire because Philadelphians are largely assholes when it comes to their fandom.

Football is apparently where it’s at though. Football stymies me. Most everyone else in the country seems to get it. It’s generally deified as The One True Sport. I understand what’s going on in Football in only the broadest sense of the word. I know about downs, I know about turnovers, field goals, and some of the lingo. But, I couldn’t tell you the difference between a lineman or a tight end. I see almost none of the grace of baseball in football. It’s too much going on at once for me to parse. There’s too much emphasis on willingly breaking the shit out of someone else’s body in a very tangible way to get what you want. Too many players get a few years of mild-renown before the permanent physical or mental injuries start to rack up from getting knocked around so hard. Basketball is fast, easier to watch, and results in fewer concussions (or at least that’s my perception – I hear more about football concussion injuries than in basketball), but doesn’t really thrill me. Hockey is close. I have my own baggage with hockey – that was something Erik was bringing me into when he died. Same for Lacrosse. And both of those tend to be really hard on the concussions too.

And golf. Don’t get me started on golf. I understand it’s hard and it takes skill. It’s also as fascinating to observe as watching paint dry.

And, despite what you read above, I know for a fact that there is grace, skill, ability, and strategy in all of the sports above – even NASCAR.

Those other sports don’t move me. Baseball can – but no other sport really does. Burn me at the stake for saying this, I don’t even particularly care about the Olympics – which shocks the hell out of my former-figure skater girlfriend, tell you what. The bruises are still healing from that statement.

Most of my friends growing up weren’t athletes given I was in the nerd set, but they all had at least one sport they watched. A healthy number of those friends had multiple sports or even multiple teams within a chosen sport that they followed. They had role models and heroes in their chosen sports – something my mother frowned upon growing up. A subset of friends even get into the fantasy league stuff which really confuses me. If I want a game with juuuust enough math, I know where to go.

I’m told that sports are the thing that seemingly hold disparate people together with common experience. It’s the ‘acceptable’ topic for people to discuss when they come from different groups. They provide an external way to come together and have some kind of common ground around a sport or a team. Or, as is likely in America, coming together against a team. Ever watched Philadelphians go to town on a Cowboys fan? Holy shit. Instant bonds. “You hate Troy Aikman? SO DO I!!!”

Why? I have no goddamned idea. There are so many other interesting things people could bond around, but ultimately the most popular one revolves around a person doing something with a ball. An end zone, or a net, a hoop, or another person, or a team of other people, who don’t want him to have the ball may or may not be involved. The following of men with balls (take a moment to laugh – it’s funny) takes priority over everything else that could be talked about. Sports are exciting, but to me, so is reading a great book, watching an action film, playing Dungeons and Dragons, or taking a run in the park.

Even as a baseball fan, though… I have to admit, I just don’t see what the big deal is with sports generally. I love the sport of Baseball for many reasons, but more than few of don’t even revolve around watching or playing of the sport itself. It’s long storied, our national pastime, and there’s a lot of neat history to it. There’s an entire pantheon of greats that stretch back far into history across multiple leagues and over a hundred years (and that’s just here in the US – stick ball games have been around a long time). Going to stadium games is fun just to people watch, let alone actually seeing the game. It’s also a sport with a strategy I can grok. It’s easy for me to understand. Mostly though, my fandom was the result of indoctrination. Baseball is a family approved way we have fun with each other (or commiserate in as Phillies fans will tell you). It was passed down by paternal grandfather to my father to me, then reinforced by my maternal grandfather who loves all sports excepting hockey (I hope his grandsons haven’t disappointed him too badly – we’re three relatively big guys who became unathletic computer nerds). Interacting with the family with the baseball ritual was, and is, easy. It was learned behavior. As it turned out, I liked it too. That helps.

With other sports and especially with their fans… it’s mostly uncomfortable for me. It’s not their fault. It’s me. I’m a baseball fan in football country. In the months between November and February, I don’t have that connection with other human beings that comes from sports. I guess that nominally I’m an Eagles fan. I like Philadelphia. I want the people of my adopted city to be happy. It’s a lot easier to deal with them when they’re happy and their teams are winning.

Okay, probably not, but, you can understand I might want Philadelphia to have nice things.

My friends, great people that they are, are absolutely inclusive. They invite me to join them in sporting the other sports. I love hanging with my friends, though gathering around under the pretense that there will be a sports game at the center of things mostly means me coming along and eating chips and dip. They’re all invested in the game. Taking time out of their game to address something I’m more interested in seems selfish of me, given their stated purpose was to watch the game. In some cases, they might not have even got together if it wasn’t for this shared fascination of something I relate to in no identifiable way. They are with friends who enjoy both the game and company. I like to see my friends very excited, but as the guy who just sees football as a bunch of dudes wearing skin-tight shiny pants and body armor until some unseen kind of strategy results in a touchdown, it kind of sets me up as the odd man out. Well intentioned as the sports event invites are. I feel a little excluded at sports-centric gatherings as a result. (though they’re appreciated – I like that my friends think to invite me regardless of my sports aphasia).

And it doesn’t really stop with friends either. When you look at the workplace, from the lowest hamburger joint to the height of the corporate arena, there’s an entire sports cult at work there. Businesses are really the only audience that can afford box seats at these games, and they’re some of the most prized perks of the business arena. If you’re in the fantasy football-basketball-hockey-baseball-curling league, your work status just went up. Water cooler talk about the big game? Did your fantasy team finally crush that guy everyone can’t stand in the office pool? You’re a part of the family now. You’re wearing the jersey of my favorite guy? High five, sports lover! We both like a popular thing together! The language of business isn’t economics – it’s sports. You can be really good at your job, but unless you identify with a sports and teams the rest of the guys in your cube farm like (preferably one that ties in with the city the central office is in) you’re mostly just Bob the Guy Who’s Good With Spreadsheets.

By not understanding sports, I feel like something was left out in my upbringing that could have proven insanely useful across all of the spectrum of life. It seems that everyone loves sports, and if you’re not down with them, there’s obviously something wrong with you.

I fear I shall never understand it. But, that’s okay. I have all of these novels, comics, and video games around. I just have to find the way to make a workplace where those have replaced sports.