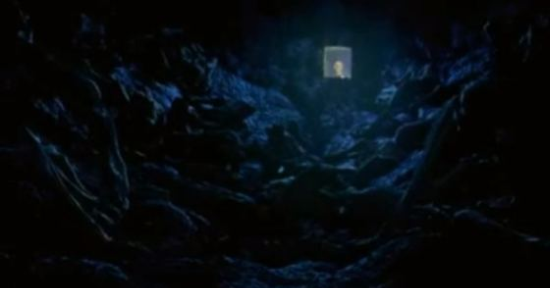 I cannot claim to be a comprehensive connoisseur for all things horror. I don’t watch slasher films. I don’t dig on Freddy or Jason. Obsessively gory films are generally not a thing I seek after, though I can make exceptions for zombies. Ghosts are my go to guys, but I also like a good monster movie on occasion – the more vague and menacing, and the less you see of it, the better. Which brings us to a 2002 film often overlooked, partially for good reason. It’s a little no-budget, guilty pleasure film called ‘They.’

It’s a Focus Film with no particularly notable cast other than this guy who you probably recognize from Joss Whedon’s Buffy. I don’t remember They getting a lot of promotion or marketing. And overall, the movie wasn’t particularly well received. The lead actress only ever did this particular film, and her delivery was lackluster. It’s viewer reception was lukewarm at best. The film’s biggest claim to fame was that it was initially labeled as Wes Craven Presents: They, but he didn’t really have anything to do with it. His name apparently was just tagged to the film to push it during release – he’s not credited anywhere in the film.

They is focused around Julia, a woman studying for her psychology master’s degree who encounters a childhood friend, Billy. When he begins babbling about a shadowy ‘they’ that affect electricity, trigger fear in children, and that move only through darkness, she tries to console him, but instead witnesses his suicide. Shortly thereafter, she begins to experience the same terrors. She finds that she’s on to something however when she meets friends of her auto-darwinated childhood friend, and is drawn further into insanity.

The monsters in the piece are utterly alien. They have all of the powers claimed by Billy: they move only in shadow, they cause malfunctions in electrical equipment, they torment children. And, as it turns out, they mark their juvenile victims for tracking to be ‘collected’ later when they have matured.

However, the movie never explains why. And that’s where the movie’s appeal lies. It doesn’t have to explain anything. The many limbed, inky malefactors simply have rules they behave by – their motives are as inscrutable and alien as their outward appearances. They are the Things That Cannot Be Known. It’s Lovecraftian. The fear of the dark unknown is one of the strongest possible fears one can have.

Yet, this film failed – it didn’t recoup the money that went into it, even after it went up for DVD sale, marking it as a box office flop. Even though its sales figures wouldn’t justify it, I think that this is one of the few films out there that could benefit from a remake. Perhaps with a new cast, a retained focus on the fluid nightmare fuel of the otherworldly fiends, and possibly with better direction, this film could take the step it needs to become something better – though I do still like it for what it is.