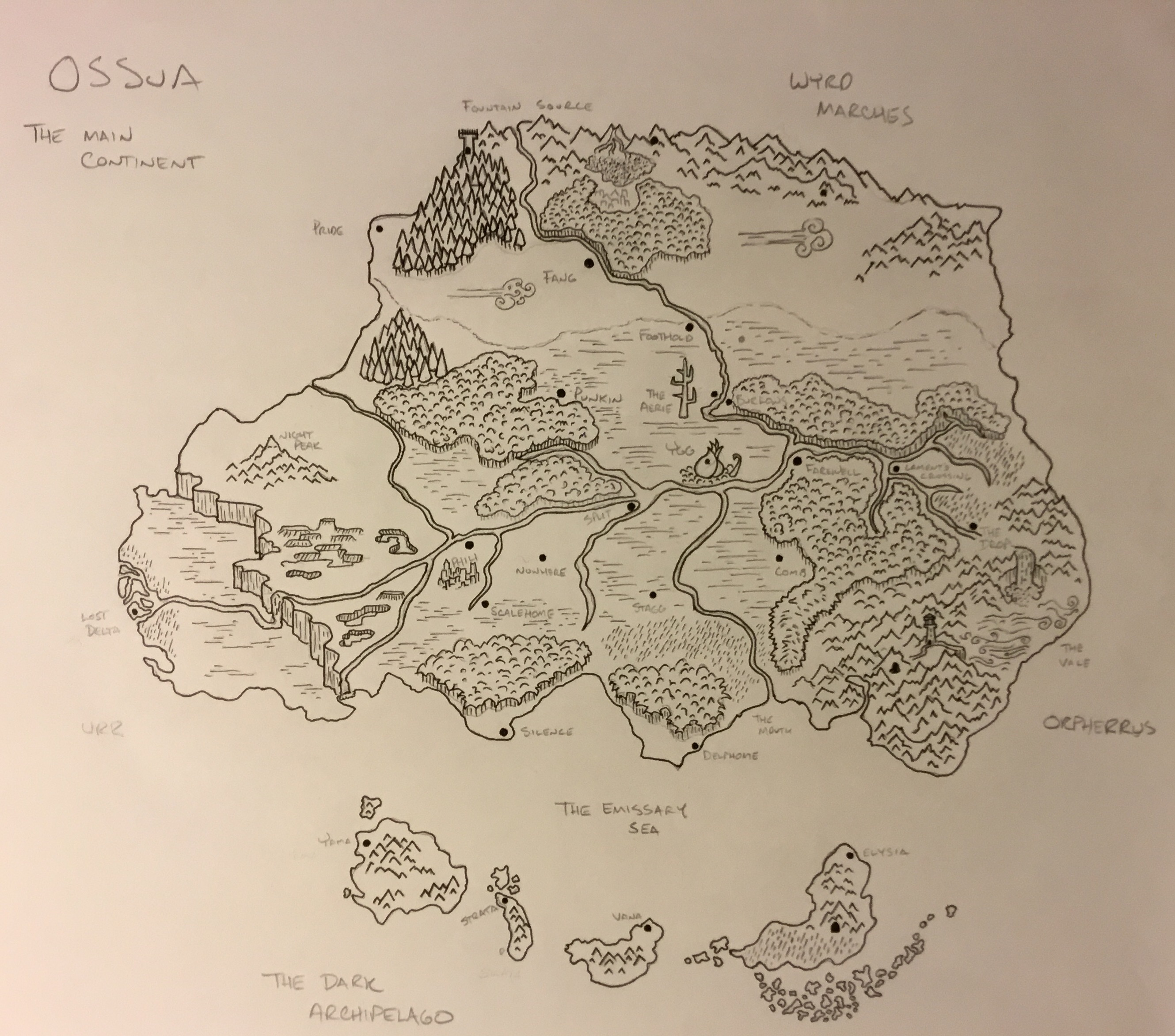 Ossua has been around for a while now. But, what is it?

It’s had a few different guises. It’s been a message board, a WYSIWYG generated experiment, and a blog. The blog has been the longest incarnation. So, in a sense, Ossua is this domain name and it’s various servers throughout the years.

But that’s not really the answer. To explain what Ossua is, you’ll need to come back to the mid-nineties with me.

I have always been rather fond of other realities as found in books, films, and stories. I guess I’m an escapist at heart. If you have the kind of early childhood I had, I suppose it might even be inevitable. Being anywhere else starts to sound good. I don’t mean to give you the impression I had a bad family life – my parents brought me up well, and even the sibling troubles between my sister and I mended once we were about three thousand miles apart and didn’t have to share a bathroom anymore. But other kids… other kids were the worst. Add in an early and traumatic introduction to the concept of death… so… yeah. I spent a lot of time in my head and in the heads of others through reading.

In my mid teens MTV released a television show called The Maxx, created by all around amazing guy, Sam Kieth. It was based on a comic by the same name, which I also picked up issues of here and there. I loved it. For those of you unfamiliar with the premise, it’s about Maxx, a purple-suited vagrant who is trapped between two worlds. There’s the world that you and I live in (the debatably ‘real’ world), but there is another world. It’s called the Outback, and that’s where our true selves emerge for good or ill. Maxx can’t seem to control where he ends up sometimes. He slips in and out of each world unwittingly, generating a potpourri of mental illness for him. Whether or not one world is more real than the other is up for debate. Each person has their own kind of outback. Maxx and Julie (his social worker and also his Leopard Queen) share one due to a linked trauma, and they spend a lot of time in it trying to figure out their own issues, fears, and insecurities.

The Outback concept was super sticky in my mind. I could see myself running ahead of packs of Isz (one of the Outback’s many weird creatures), climbing its smoking mountains, and in general reveling in the pure weirdness of the place.

Then one night in college I finally asked myself: what does my outback look like?

And that… that is Ossua. It’s a world in my head that I’ve been building since that lightning bolt moment at my dorm room desk. I didn’t start drawing things that day. That would come later and never to my satisfaction. But, the world germinated and started to push out little tendrils into my brain until I could see it.

The clarity and scope of it wasn’t like anything else I’d dared to dream before. I saw a land that was part the ruins of our culture on Earth, part Tolkien-esque fantasy land, part Faerie Tale, and all weird. It was populated by not only humans (some even from our world), but by benign beastmen (at least twelve tribes!), Gourd Maws (good-natured yet terrifying looking demi-humans), a long lived royal line that ruled benevolently. It was a place where nothing ever dies so much as ‘moves on’ into the East to an undiscovered sub-continent that only the departed can know. Shamans grew vegetables and honored their farm animals, gently releasing their souls and honoring them before taking their flesh. From the Grand Palace Bulb in the city of Ygg, a great and egalitarian empire was formed, where justice and happiness existed for every citizen of the Empire. Nothing had to suffer. Nothing had to fear. It was a wonderful place where everything was right.

I lost a great and admired friend, Erik, in the summer of 2005. And on that day, it turned out that the Great Baron of Ossua died. His sudden death – in front of me no less – sent me into a grief spiral that essentially broke my own private Outback over a series of months, shattering it into a thousand splinters of broken mirror. Ossua’s fate paralleled my own life; it became something broken, suffering catastrophic throes of pain and loss. It became as much an autobiographical work as it was a fantasy setting. A lot of stress went into it. A lot of lessons. A lot of hard times.

It didn’t die, though. Places like the Outback and Ossua have trouble laying down, even when dealt a mortal wound. It persisted. It grew shadows. Balance went off kilter, turning the landscape of my mind into strange reflections of what they once were in my bizarre world. Slowly, a story emerged from it. I’d never been able to do anything with Ossua because in a perfect land where nothing goes sideways… there aren’t a lot of gripping stories to be told. Now that Ossua was battered and mangled, I thought I might just have a story grow out of it. If I worked at it. If I believed. And if I didn’t let the trauma of 2005 drive both Ossua and myself into the ground.

Soon after, I found myself with the opportunity to register two domain names. One of them was this one: ossua.com. It’s been with me, waiting for it’s true purpose. For about thirteen years now I’ve been refining it in my head. Populating it with all sorts of beings great and small, fair and foul. And it’s meant to be for the young and old alike.

And I’m going to write it. Finally, I am going to write it. Because my niece and nephew aren’t getting any younger. And Uncle Maurice has so many stories to tell them. Also, It’s a story Erik’s widow and his daughter deserve to hear too. HIs daughter is already twelve. I’ve wasted so much time.

I want you to see it too. You should get to travel the River Proteus, see the fantastic shores of Delphome, climb Night’s Peak, and maybe even see beyond The Drop in the East to peek into the Misted Vale where the spirits live.

So come with me. Keep an eye out. I think it’s time to start setting the history of Ossua down on paper. Because, an untold story doesn’t do anyone any favors.